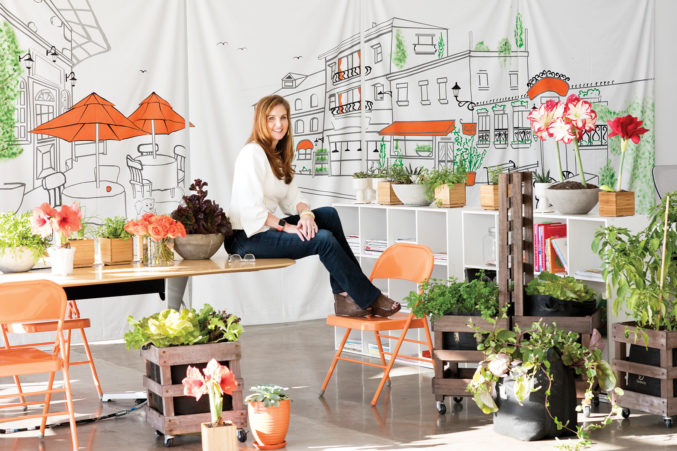 When I first arrived at the Design District headquarters of Gardenuity, the Dallas-based company that delivers container gardens right to your door (thus emboldening even the blackest of thumbs to attempt growing things), for a Thursday evening “Pepper Party,” I couldn’t help but be reminded of a greenhouse. Large glass doors and windows invited light into the space, and small potted plants lined the floors. Gardening stations were set up on long tables and, if you looked closer, you could see slices of jalapeños lining decorative flower jars. Gardenuity co-founder Donna Letier said it’s the little things that get remembered when you throw a party like this one. But the holy grail stood at the center of the space: the “Cocktail Garden.” Pepper-infused drinks from Dallas’s Black Eyed Distilling added an extra bit of liveliness to the event. Nothing gets you in the mood for planting peppers better than a spicy, jalapeño margarita (or maybe two or three).

As the drinks flowed, Letier invited the group to the gardening stations, which included kits with everything needed to put together a portable pepper container garden. I was surprised to see the items inside were named after products you would typically see in makeup bag. There was a custom “foundation” compost, a soil “primer,” and a plant “toner” among the kit. Letier said she often gets questions about the naming conventions of her items, but the way she sees it, “We are building this garden from the plant’s perspective.” With Letier’s instruction, putting together the kits was a breeze (I only messed up one time). And in no time, everyone had their very own pepper plants ready to go in a portable gardening bag. I have to say, I was proud of myself! Maybe it was those spicy margaritas, but I was positively beaming at the prospect of taking care of three new little plant babies. Letier knew exactly how I was feeling. “I actually believe in my heart that harvesting something feels so joyful,” she said. “It feels like you’ve accomplished something.”

As I placed my new peppers on my balcony later that evening, I realized that being a bona-fide gardener is not about know-how or green thumbs. It’s about taking pride in your work and appreciating what goes into a successful garden. Letier captured my feelings perfectly when she told us that “gardening is a way to grow gratitude.”

Gardenuity’s next cocktail-fueled workshop is a “Summer Soiree” on Thursday, June 20th. You can check the Gardenuity events pagefor more info.

Tags:a about Gardening Gratitude local me: Taught What Workshop

Gardens play such an important part in our lives throughout …
December 23, 2017

When confronted with an existential threat, it’s good to know …
June 15, 2017