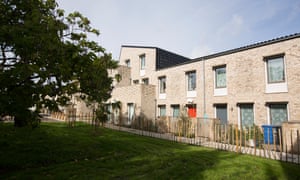 It was gratifying to learn that the RIBA Stirling prize has been awarded for Norwich council’s Goldsmith Street during the centenary year of Christopher Addison’s Homes Fit for Heroes initiative (Award for best new UK building goes to council housing project for first time, 9 October).

As Oliver Wainwright reports, the council could build more housing if right to buy was reformed – or, better still, abolished. When the scheme was first introduced in 1979, Norwich councillors – led by their housing chair, the late Lady Patricia Hollis – took a stand against the Thatcher government by refusing to treat sales as an urgent priority. The minister responsible, Michael Heseltine, sent in Whitehall officials to oversee sales for several years. Let’s hope that in future councils will be able to circumvent legislation on forced privatisation.
Dr Michael Passmore
Greenwich, London

• At last, a social housing development that deserves all the accolades coming its way. As a young trainee at Sheffield City Architects in the 1960s – an era of tower blocks and “streets in the sky” – I recall one man’s efforts to go against the prevailing trends. It seems he may have been way ahead of his time.

When confronted by plans to fill the hilly greenery of Norfolk Park with clusters of 18 ugly tower blocks, a lone senior architect set about designing his own alternative scheme with high-density, low-rise individual houses: a model that had all the character and properties of a hillside village. Every house had its own garden; there were lots of communal spaces and the layout was carefully thought out to avoid the clutter of street car parking.

It was a brilliant design, sitting naturally in the green parkland landscape – but it was not to be. I have no idea why.

So, Norfolk Park was duly infested with groups of tower blocks – so ugly and flawed they were later demolished between 1997 and 2005. What are the chances of them being replaced with a hillside equivalent of the prize-winning Norwich scheme?
John Fullard
Ilminster, Somerset

• So the importance of high-quality social housing has finally been recognised. The Stirling prize going to housing in Norwich is very significant. The same scheme also won the RIBA 2019 Neave Brown Housing Award.

This award was set up in memory of my late husband, Neave Brown, who in this country only designed high-quality council housing. He was awarded the RIBA Gold Medal in recognition of his work just a few months before he died.

Neave has been described as a pioneer of low-rise housing as part of a community. I am proud to live in one of those schemes.
Janet Richardson
London

• I don’t understand the boringly predictable complaints from the Residential Landlords Association (Evictions cost private tenants about £1,400 in lost work and bills, 11 October) that new eviction laws will threaten the supply of private rented housing. If they all sell up there will presumably be a glut of properties on the market for those who actually want to live in them.

All we need then is a bracingly leftwing government that will bring the council tax bands properly up to date to discourage under-occupation and second homes, and allow councils more freedom to buy and build. Labour should be pushing at an open door with these policies.
David Redshaw
Gravesend, Kent

• While there may be irresponsible tenants, the harsh rules apply to those who have done nothing wrong. On leaving university my daughter worked in the retail sector on a very low wage, and could only afford the cheapest rented one-bedroom flats, which were usually owned by new landlords.

On a fairly regular basis she would get notice to quit as the owner, having made a profit, wished to refurbish the property so they could increase the rent. Each time it happened, the anxiety and cost of removal took their toll. Fortunately she had parents who could afford to support her at these times, but many people do not have this fallback.

The global supply chain is incredibly complicated, with …
August 22, 2017