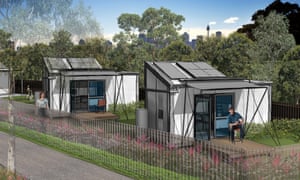 When pious architects choose to direct their talents toward a higher calling, they tend to do so in the form of towering cathedral spires, awe-inspiring sermon halls and grandiose vaulted ceilings.

Derek Mah, an associate at NBRS Architecture, went for something a little more humble.

At a Sunday sermon about two years ago at Community Church Hornsby, on the northern fringes of Sydney, he was approached about using his skills not to devise great big buildings in the name of God, but tiny houses for the homeless.

The suggestion came from a friend in the congregation – David Woolridge, who, as Mah put it “has always been passionate about trying to get guys off the street and helping them out. He came up to me and said he’d gotten an idea about how to solve homelessness”.

It is a vision about to be realised in Gosford, on the NSW central coast, where three to four “tiny homes” that each take up just 14 square metres will be completed next month as the first project of Woolridge’s Tiny Homes Foundation, designed in partnership with NBRS Architecture.

“Think of the house as a shoebox,” Mah suggests.

Adopting the sustainable development goals is a business opportunity for Australia

“Down one end a small toilet and shower, the other end a bed, and in the middle a little kitchenette which opens up through glass doors onto a deck, which can be open in the morning and means the back garden becomes the living room – it feels bigger than it is, integrating the outdoors.”

The word “shoebox” isn’t usually a selling point in real estate parlance, but Mah uses it in this case with pride, given the long-term objective of the project is to enable housing to be provided to as many of Australia’s estimated 105,000 homeless people as possible in a country where building isn’t cheap, and land is eye-wateringly expensive.

Each tiny house costs less than $30,000 to deliver, and the small size of the building means it can be squeezed onto excess council-owned land not suitable for conventional housing, at potentially no cost.

“The land for the Gosford project had no direct driveway access, only pedestrian access, and was long and skinny so didn’t lend itself to other uses,” Mah says.

He adds that the houses are appropriate for a single person, with the potential for guests, and that residents will also have access to an additional community facility, kitchen and laundry.

Wooldridge tells the Guardian that as “an Australian and a Christian” helping the less fortunate is a privilege, not an obligation.

He says the project is sourcing tenants through Pacific Link Housing, and those living in the houses will participate in an “equity participation arrangement” in which “agreed amounts of their rent payments not utilised for maintenance and other direct costs of their tiny home will be credited to a notional future housing account that, subject to some equitable and simple terms, can be made available for any future housing-related costs.”

The Tiny Homes Foundation has a “replicator program” on its website for parties interested in undertaking a similar project in other neighbourhoods around Australia, and is open to its model being used for anyone keen to avoid splurging too much on house and land.

Construction will be undertaken by unemployed people through training services provider the Skills Generator, which works with various programs including work-for-the-dole. 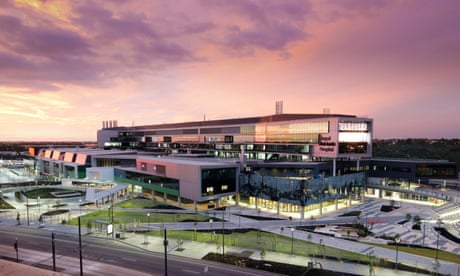 Sensors, plants and waste heat: Adelaide hospital’s bid to be most energy-efficient

The Tiny Homes Foundation say this is so the project can deliver an added dividend of helping those in need develop further skills. This is despite the fact that the work-for-the-dole scheme in general has attracted plenty of controversy, such as in April when the St Vincent de Paul Society described it as a “punitive” scheme that risks creating “a class of working poor”.

Tiny house projects for the homeless overseas have also prompted concerns – such ventures in the US have been criticised for housing people in substandard conditions, lacking access to water and electricity and provoking fears that they will lead to the creation of slums.

Katherine McKernan, the chief executive of Homelessness NSW, does not buy the comparison, saying that the Tiny Homes Foundation is delivering “houses in every sense of the word”.

In contrast to some US projects, the Gosford homes will feature full connectivity to energy and water mains and quality insulation.

She says any project aimed at helping the homeless is welcome at a time when more than 60,000 people sit on NSW public housing waiting lists and Anglicare estimates that just 1% of available properties are affordable for low-income families around Sydney.

McKernan notes, however, that tiny homes are by no means the solution for all homeless people.

“For some it is suitable – we’ve done research on older women and they’ve agreed they could live in smaller places, but they need to be designed really well,” she says.

The stories you need to read, in one handy email

“But the majority of people in need are women and children experiencing domestic violence issues at home, so the houses required are family homes.”

“Tiny houses are a really good thing, but only useful for small number of people – circumstances need to be thought through.”

Wooldridge concedes that his project “is not the only solution”, but believes it will be “more than a tiny part of the total answer”.

“Our model is innovative, holistic, scaleable, flexible, zoning compliant and cost effective, even cost-neutral after considering the broader community/social costs already being incurred.”

Tags:a bigger feels for homeless homes is it shoebox than that the tiny

The Escape One tiny house. Escape Tiny houses can be extremely satisfying to look …
July 20, 2017

Tiny Houses are nowadays becoming the go-to option for most …
October 23, 2019