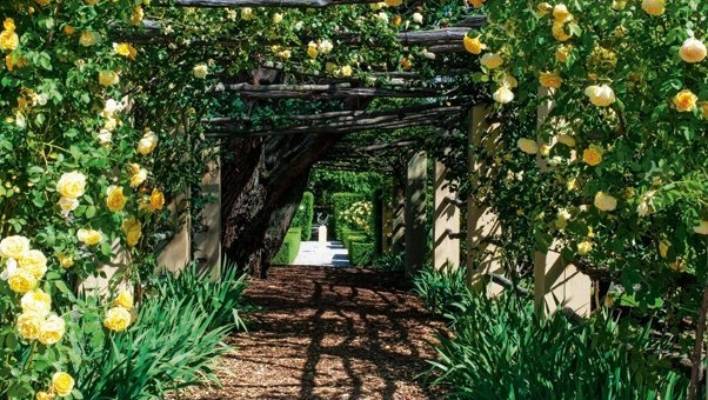 A life of tinkering about was never going to work for Viv and Mike Beavon. Try as they might to slow down, they soon decided their retirement plan was as flawed as they were bored.

“We would sit there and think, ‘What are we going to do now?'” says Mike of their easy life in a waterfront house in Picton. “It was either get a job or get a garden.”

They got both when they bought Fig Tree Gardens, a 1.6ha property on the outskirts of Spring Creek in Marlborough, with a multitude of formal plantings, dappled woodland, a native grove and an espaliered fig plantation. A world away from that seafront inertia, this park-like package requires an enormous amount of work, which they relish. “I do everything myself. Gardening is my happy place,” says Viv.

JUILET NICHOLAS/NZ HOUSE & GARDEN
Mike and Viv Beavon surrounded by a rampant climbing rose they have been unable to identify, despite asking around: “It comes out at the end of October and lasts right through summer,” says Viv.

A long bed of daylilies blazes a bright trail along the front of the house, taking garden visitors to the edge of the Oval Garden, with its pretty border of pink and blue, and the papal purple blooms of ‘Reine des Violettes’ roses.

Two avenues of buxus and ‘French Lace’ roses lead from the Oval Garden to the Long Lawn, with its sentries of variegated elm. Pathways wind through native trees, a fig plantation and borders of olives and feijoas. Wander further and there’s a bridge across a spring-fed, flax-lined stream, a grassy woodland and a citrus orchard that completes this circuit, leading visitors back to the daylilies.

“Viv’s a good worker. She doesn’t like sitting around,” says Mike, who is clearly of the same ilk. He manages hedges, lawns and “heavy stuff”, such as spreading 18 tonnes of crushed mussel shell onto pathways by hand to brilliant effect. It gives a satisfying crunch as you walk across it and, says Viv, “in certain areas it sparkles in the sun”.

When she’s not able to get out in the garden she’s in her potting shed or crafting stacks of china tea cups, which pop up in flowerbeds along with the occasional plastic flamingo.

This happy gardener, whose pink hair reflects a love of colour and fun, is slowly adding her own signature to the property designed and planted by Margaret and Ray Gauden-Ing 20 years ago.

“I am trying to make it my garden. At the moment I feel like a guardian of it.”

The garden’s founders shared a thick folder of information with Viv, which was invaluable when visitors on the Rapaura Springs Garden Marlborough tour visited last year, just six months after the Beavons had moved in and got to work.

“I think I am very lucky that I have the time to share it with people,” says Viv. An earlier property the couple lived in, Barnlea Gardens, just two doors down from Fig Tree Gardens, was in Garden Marlborough tours in 2014 and 2015. They have worked incredibly hard to get here. “This hasn’t been given to us on a plate.”

The couple spent 30 years building up a chain of successful butcher stores in Auckland before consolidating into one major outlet in Manukau. Meanwhile, Mike bought and sold real estate, ran a car yard, and collaborated in a motorhome business.

When they sold up 15 years ago, they took to the road in a luxury motorhome and spent 18 months touring New Zealand. Mike lived in Blenheim until age 16, so when they drove through Marlborough in 2006 they decided to park up in Picton. There they embarked on several retirement projects, including renovating an eight-bedroom villa and an art deco apartment block, before moving to Barnlea Gardens.

Once there, Viv toiled happily in her beds, held weddings, ran a little garden shop and wondered what was behind the high laurel hedges of the nearby Fig Tree Gardens. But before she found out, she was diagnosed with bowel cancer, motivating a major downsize that saw the couple move to an apartment in Picton for 12 months. When recovery and boredom coincided, they relocated to a lifestyle block in Grovetown, and from there to Picton’s waterfront.

“It was always our dream to have a house and a boat out the front,” says Mike. “But after 12 months we realised it wasn’t us. We missed the garden.”

Viv is aware of others who may feel the same way, so her next mission is to organise afternoon teas at Fig Tree Gardens, particularly for retirement home residents.

Now she knows exactly what’s behind the high laurel hedge, she’s keen to share its joy.

Tags:full Gardening into of out retirement time

Plant this Dutch plantsman Piet Oudolf has popularised burnet, AKA sanguisorba, for its …
October 9, 2018

By Debbie Roland Compost Specialist Rainwater harvesting is the …
September 11, 2017

It seems as though every year since I graduated from …
December 23, 2017