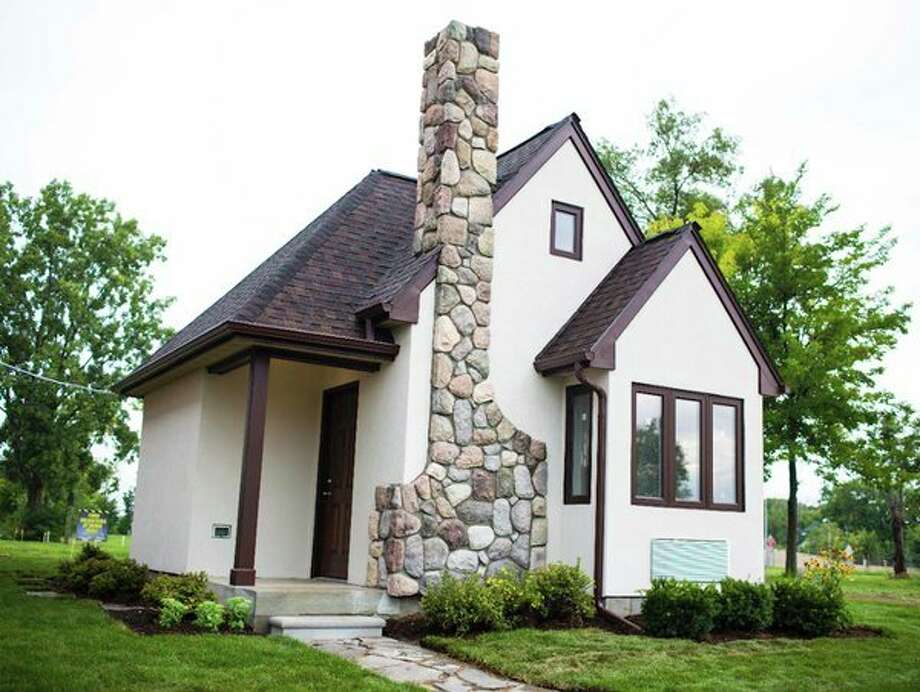 Clark mentioned the Cass Community Social Services Tiny Homes endeavor to her home church, Midland First United Methodist’s congregation, in hopes of raising money. Each year, the Midland congregation does a project for Lent and this past Lenten season, it chose to raise money to sponsor one of 25 projected tiny houses in Detroit. Clark was also approached by a congregation member, who asked to remain anonymous, that said they would match whatever the church raised.

“At the end of the Lenten season, we had over $15,000 and with the anonymous donor, we had enough,” Clark said.

Clark said she was “surprised” that they were able to raise as much as they did. She said there was no pressure to donate and there wasn’t much conversation about it.

“It takes my breath away how good people are,” said Fowler, during a recent visit to the church, referring to how the Midland First UMC congregation along with other donors helped the tiny home plight.

The Midland First congregation sponsored house is being designed by Daniel Libeskind, whose design credits include the Art Museum in Toronto, a Jewish museum in Germany and the World Trade Center memorial in New York. He is also the former head of the School of Architecture at Cranbrook Academy.

Libeskind and his wife, Nina, contacted Fowler after seeing a segment about the project on PBS and he offered to donate his design talents for three of the houses.

Clark said the congregation is excited about the designer of their sponsored house.

“The Midland home should be started this summer,” Fowler said. “It should be completed by Christmas.”

The Midland-sponsored house will be located on Elmhurst next to the first house, on church-owned property. The houses are part of a community of tiny houses.

When Fowler recently visited the crowded Midland First UMC, she shared information about the tiny house project. Seven houses are complete with people living in them. Six are under construction. Construction of seven more houses are expected to begin in June. The houses range from 250 to 400 square feet and most have or will have a front porch or rear deck, to increase living space.

Fowler attended Midland with the Ambassadors, a singing group from Cass UMC, made up of homeless and formerly homeless men. Many who attended said they wanted to hear the charismatic Fowler and were anxious to hear the gospel group.

“I wanted to hear Rev. Faith Fowler speak,” said Gayle Swanson, Midland, who commends the Detroit pastor for making a difference in the city.

Swanson attended with her husband, Bud, and Janet Biggs. Marlene Langfeldt and her husband, Dan, Midland, were anxious to hear the Detroit minister’s message and hear about the tiny house project, noting that it is very exciting.

“I have been homeless, and I have true empathy for those that are,” said Amanda Reece, Midland. “I think it is wonderful that in this prosperous community, people here care about those many miles away that are struggling.

“People here helped me get on my feet when I had nothing,” Reece said. “So, it isn’t surprising that they would reach out to others.”

Cassie Foley and her best friend, Ruth Sutton were anxious to hear Fowler and get Fowler’s second book, Tiny Homes in a Big City. The book looks at the “American Dream,” the historical uses of small houses in the United States and how tiny homes have been used for poor and homeless people across the country.

During her visit, Fowler showed a video of people talking of how they went from homeless to a homeowner. She also noted a 22-year-old who moved into the house after a long time of couch surfing.

Clark said what touched her the most about the program, other than giving people an opportunity to become a homeowner, was the criteria.

“They don’t just turn them free with a house,” Clark said. “They teach them home responsibility, yard management, how to fix a leaky faucet. They teach them how to be homeowners and how to take care of it.”

“Any one of us could have been vulnerable to being homeless or impoverished or in need of help. We need to help those who need help,” Clark said, noting that when we do, we as a society are strengthened.

Clark is also impressed that residents staying seven years will own their house.

The project received more than 71 million visits on social media. Some of the visitors offered to help build a house for the project or donate materials. Fowler also noted the project drew a $100,000 donation from Jon Bon Jovi.

“Midland First UMC has a long history of mission outreach,” Clark said, noting that the church has sent mission money or teams to various parts of Africa, Alaska, Russia, Poland and Mexico. In addition, the church also supports many Midland-area non-profits and charities.

“We do international, national and local outreach,” Clark said. “Outreach is a big, big part of our budget. We are concerned about helping others who need help.”

Corrections & Clarifications: An earlier version of this story misstated …
December 1, 2017