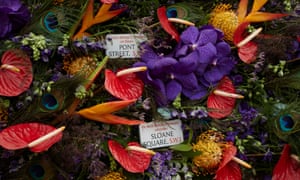 You could be forgiven for thinking the Chelsea flower show is the only horticultural happening this spring, what with nightly primetime BBC TVcoverage, rose-sniffing celebrity visitors splashed across the front pages and bookies taking bets on which designer will bag best in show.

But has some of the shine come off what the RHS calls “the world’s most prestigious flower show”? The tricky economic climate has seen the number of show gardens on Chelsea’s Main Avenue almost halve this year, down to nine from last year’s 17. Previous show winners, including Andy Sturgeon, Cleve Westand Tom Stuart-Smith, are absent, and after eight years, Chelsea’s main sponsor has decided to bow out.

Nevertheless, RHS Chelsea seems as popular with its visitors as ever. The show is sold out weeks before it opens on 23 May. But that’s part of the problem: getting tickets can be difficult even for RHS members, and first-timers are often disappointed to discover they can’t set foot in the gardens, instead having to crane necks over the masses for a glimpse of foxglove or fern. You can’t bring children under five into the showground, either.

As the Guardian’s gardening editor, I’ve felt privileged to visit Chelsea for the past nine years, but I can’t help wishing the same spotlight was afforded to green-fingered events going on elsewhere. Here’s a roundup of other ways to celebrate plants and gardens this spring.

If RHS Chelsea is a bit too buttoned-up and corporate for you, the Chelsea Fringe, from 20 May to 4 June, may be your natural home. The Fringe, which is billed as an alternative garden festival, is now in its sixth year. Although it began in London, there are dozens of events around the country, from art installations and performances in gardens to foraging walks in parks.

There are online-only events, too, such as the #mygardenrightnow project. Organiser and gardening blogger Michelle Chapman calls it “a virtual peep over the garden fence”: all you have to do to get involved is take a snapshot of what you’re up to in your garden on 3 and 4 June, and post it on a blog or via Twitter, Facebook or Instagram account with the #mygardenrightnow hashtag.

If you like the idea of a flower show but by dint of geography can’t make Chelsea, bear in mind that the RHS runs 10 other shows around the country, from Cardiff in April to Malvern Autumn in September. New to the circuit is Chatsworth, taking place from 7-11 June at the stately home near Bakewell in Derbyshire. RHS shows director Nick Mattingley says the style will be somewhere between Hampton Court and Chelsea, and it has pulled in some impressive designers for its first year, including Chelsea regulars Jo Thompson and Paul Hervey-Brookes.

Gardeners’ World is celebrating its 50th anniversary this year, and if you’re a fan of the programme, this is the show for you. At NEC Birmingham from 15-18 June, it includes all the fixtures you’d expect from Chelsea (the show gardens, the floral marquee, the celebrity appearances) but the roomy surrounds of the NEC allow for expert demonstrations and a separate programme of talks. Unlike Chelsea, children of all ages are welcome, with their own schedule of free activities, including a sandpit for mucking about in.

If you don’t have a ticket for Chelsea but want to soak up the flower show atmosphere, stick a flower in your hair and head to Sloane Square in London between 22 and 27 May for a jaunt around the shops and businesses taking part in this free annual event. High-end retailers including Jimmy Choo, Brora and Smythson create flamboyant floral displays on their shopfronts, some as enticing as anything you’ll see in Chelsea’s floral marquee. This year’s theme is floral safari.

If houseplants are your thing, the Hignell Gallery in Mayfair, London is hosting an exhibition of hand-carved stone cactus sculptures by Ben Russell, surrounded by a backdrop of live plants sourced and arranged by indoor gardening specialists Conservatory Archives. From 11 May to 3 July.

The Garden Museum on the south bank of the Thames in London is about to reopen following a major Heritage Lottery-funded renovation. During the museum’s closure, “artist-not-in-residence” Eileen Hogan asked 90 people to nominate a green space in London, along with a description of why it was significant to them. She then travelled to the places and sketched, creating a body of pages from which she could choose a dozen sites, one for each month of the year, to turn into large finished canvases. The exhibition is open from 22 May until September.

The master gardener course is returning to Bonneville County this …
December 14, 2019

most gardens consist of a combination of natural and constructed …
June 7, 2016