SERIAL Apple leaker Sonny Dickson is at it again, and this time he has shared what appears to be part of the plans of the iPhone 8.

Dickson, who has a history of more than three years of leaking details of the pre-released iPhones, today has shared what could be confirmation of some Apple fans worst fear about the flagship iPhone 8 to be released later this year. 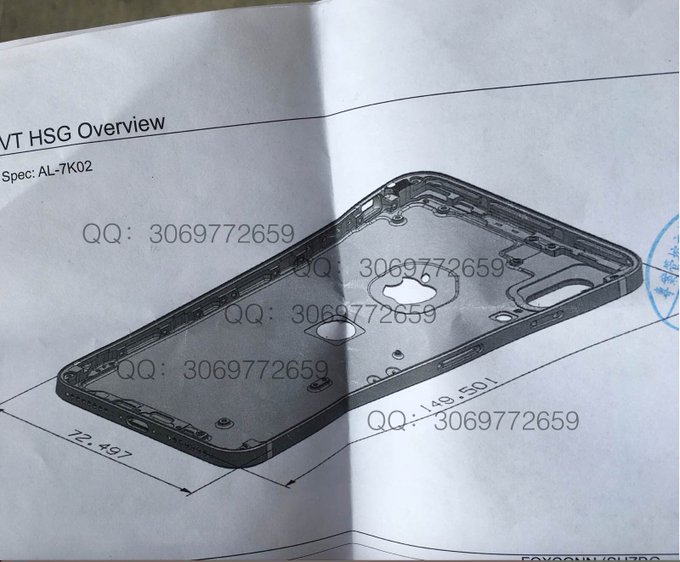 iPhone 8 looks to be taking a new direction

The schematic, which a watermark suggests has been obtained through the Chinese social network QC, appears to reveal the design details of the rear panel of the iPhone 8.

If the schematic is accurate, then it seems to be proof that Apple has found it too hard to keep the TouchID fingerprint scanner on the front of the phone and moved it to the rear.

The schematic shows that the phone has dual camera lenses running vertically down the phone, rather than across the back of the phone as with the current iPhone 7 Plus design.

It also shows the location of what is most likely to be the fingerprint scanner beneath the Apple logo — and not included in the Apple logo which some iPhone fans including analyst Carolina Milanesi had raised as a possibility.

Dickson, who does not say how he got the image or the likelihood of its accuracy, notes the sketch of the presumed iPhone 8 design also appears to have dropped the two volume buttons on the side of the iPhone.

Dickson makes no comment on the measurements indicated on the sketch, but if it is genuine then this reveals another key bit of information about the iPhone 8.

Dickson has confirmed to News Corporation that he believes this to be the final design.

The sketch shows a iPhone case design that measures 72.497mm wide and 149.501mm tall — which would make the iPhone 8 about 1mm wider than the current iPhone 7 and about 1cm taller.

A slimmer and longer iPhone would be in line with the new look Samsung Galaxy S8.

While this appears to be the biggest leak so far about Apple’s plans for the iPhone 8, there are reasons to be cautious.

Dickson has a good track record on leaks, but this could be wrong. It could either be a design that Apple tried and rejected for the iPhone 8, given we know Apple tries out various models before it commits to a final design.

With no indication of the source, it is impossible to confirm that it is even a genuine sketch of an Apple design.

Yesterday, there was a warning by analyst Andy Hargreaves at Pacific Crest Securities that Apple would have to delay the iPhone 8 if it could not either solve how to incorporate a fingerprint scanner into the screen or settle with the design compromise of putting the fingerprint scanner on the rear of the phone.

While many smartphones have the fingerprint scanner on the rear of the phone, one of the downsides of the design is that you cannot unlock your phone while it is sitting on a desk.

Audi has revealed the new A5 Cabriolet ahead of its …
November 4, 2016