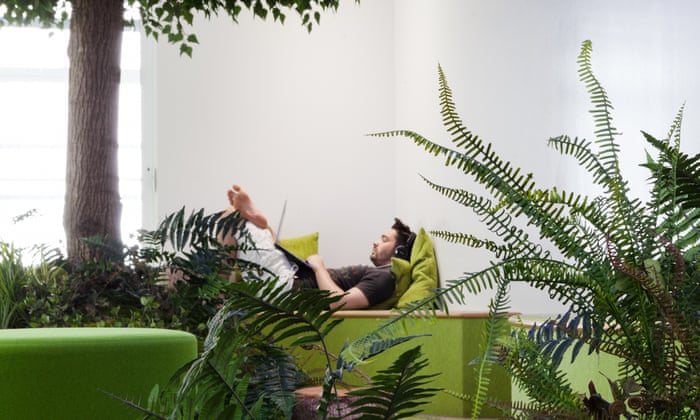 Most offices have a few plants dotted around the place. Some companies, however, like to take things to extremes. Amazon has treehouses inside its offices, Microsoft employees work in treehouses in the woods; while Timberland’s headquarters has gardens with orchards.

The benefits of bringing plants in workspaces are well documented. Researchers have found that as well as brightening up the office environment, plants can reduce sick days and stress. Eddie van Etten and Pierre Horwitz from Australia’s Edith Cowan University wrote in the online publication The Conversation that indoor plants can “scrub” the air of bacteria; remove harmful chemical compounds released by cleaning products; and improve people’s moods.

Companies of all sizes are taking note. Steve Taylor, project director at office designer Peldon Rose, helped create a botanical meditation area for digital media company Essence’s London office. “We created a mini oasis out of three or four trees; it had benches covered in moss; the walls were clad in moss. As soon as you opened the doors, it immediately symbolised that this was a space to relax in, to squish your toes into the grass, lie back and enjoy nature,” he says.

The Essence meditation room has real plants. Taylor says many companies do not, however, want the added responsibility of keeping plants alive. “I’ve worked with some clients who had living walls built by other companies, and their living wall very quickly became a dead wall, which is not a very nice symbol of your organisation. So you have to get the right balance.”

There is the added complication of allergies when introducing real plants into the office space. Nicolas Tye Architects in Bedfordshire had to empty its offices of plants when one of its workers had an allergic reaction to them. Instead of the plants, it now has vast windows overlooking the countryside and a workplace vegetable garden.

Nicolas Tye says some staff are reluctant to engage in the gardening. “That includes me as well. I do very long hours, I don’t really have time for all sorts of things.” But, he says: “You see the difference in people being involved in non-work stuff around you.”

There are tangible benefits to a company’s bottom line from enriching the workspace with plants or other elements, says Dr Craig Knight of the University of Exeter. He undertook research to investigate the prevailing wisdom of the so-called lean space: the idea that if there is nothing in the space except the job to be done, workers will concentrate and be more productive.

He explains: “It didn’t make a whole lot of sense scientifically because there is no animal on the planet that thrives in a lean space. Why should a human being be any different? So we tested it and it doesn’t work at all. It’s an entirely toxic system.”

He and a group of academics then undertook another experiment with one of the big four accountancy practices, which was a firm advocate of the stark, lean workspace. The researchers introduced £10,000 worth of plants into its offices, which Knight says, boosted productivity by around 15%.

“We found that when people put plants or any other form of enrichment into a workspace, they felt better and performed better, like any other animal. When you said to these people, ‘Why don’t you develop the space as you see fit,’ they performed best of all there.”

Knight applauds the introduction of nature trails, workplace allotments and anything that encourages engagement with the workspace, but warns against infantilising the workforce or treating workplace decor as a cure-all.

“We have a parental managerial system where they either put [workers] in these horrible toxic spaces, or they’re kind and put them in places where they can garden. But it’s all part of the same continuum. The best workspace is a space where people say, ‘Why don’t you do what you think is best for the job?’”

Moneypenny, a switchboard services company based in Wrexham, did just that when it undertook its £15m office development, surveying staff about what their dream office would be.

The resulting workspace has plenty of plants, both real and fake; natural ventilation instead of air conditioning; and huge windows on to a duck pond, orchard and woodland. There are nature trails in the seven acres of landscaped grounds, and a treehouse meeting room inside the 91,000 sq ft building.

Ed Reeves, who co-founded Moneypenny, says the plants enhance the workspace. “The more emphasis we put on to the working environment being a calm and productive space, the better attendance records we have.”

The plants inside the building also serve a practical purpose in terms of sound absorption. “We’re obsessed with having a quiet, calm working environment. There’s no doubt at all that the planting plays a very big part in that.”

Sign up to the regular Guardian B2B email here for more insight and advice direct to your inbox.

It is miraculous that soil, arguably the most exquisite biological …
November 29, 2017

Plant this Dutch plantsman Piet Oudolf has popularised burnet, AKA sanguisorba, for its …
October 9, 2018

Work with the Growler project in Selsey earned a green-fingered …
July 24, 2017