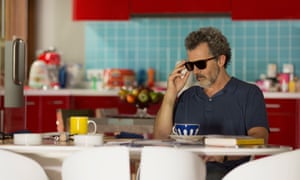 Two almost-autobiographical films came out in late summer, one set in a Knightsbridge flat decorated in shades of porridge, and the other in an apartment in Madrid filled with brilliantly coloured design icons and flamboyant figurative artworks. The first demonstrated few aesthetic choices beyond a wall of mirror tiles; the second maybe too many. Still, you can probably guess which one I preferred.

This mismatching movie pair is The Souvenir by Joanna Hogg and Pedro Almodóvar’s Pain and Glory. The first details the early film-making years of its director, and a relationship with a manipulative heroin addict. The second, set in the unable-to-make-films years of Almodóvar’s life, loops together multiple strands of his existence, including a replacement of prescription painkillers with street heroin that may or may not be true. (Who cares? It’s such an acute comment on pain relief in these Sackler times).

Hogg’s unformed Knightsbridge interior is the perfect, dull backdrop for her own inchoate, twentysomething state, a physical version of a life utterly free from conspicuous displays of just about anything. A visit to her parents’ country home – a rather fine slab of Georgian – reveals an equally undemonstrative existence played out across more acres of cream fitted carpeting.

The highly constructed condition of Almodóvar’s world, on the other hand – the Fornasetti cabinet with butterflies fluttering across its doors; the Enzo Mari Pear poster; the shiny red Magistretti lamp – is a drama in itself. Its exquisite scenography suggests there is little or no divide between the director’s personal and professional worlds. In fact, some of the pieces of furniture and objets reoccur. In 2009’s Broken Romance the camera lingers on a red Enzo Mari Apple print, when Penelope Cruz, as the bored lover of a film producer, gets sent off to redecorate his already lavishly decorated mansion. We travel through magnificent rooms, filled with Saarinen tables and Bertoia wire chairs, as well as lush paintings. I don’t doubt that some are by Guillermo Pérez Villalta. Everywhere red leaps from the screen, in a film ostensibly about a man who has lost his sight, who now lives in a world where objects are defined by their feel, not their look.

Interior design in films is an integral part of the narrative; when it’s good, it creates an additional psychological layer. Indications of taste and status are all very well, but it can do so much more. I mean, who wouldn’t expect Patrick Bateman’s apartment to resemble anything other than an office lobby-cum-operating theatre as it does in the adaptation of American Psycho? Every element of the film struggled to convey the novel’s relentless sociopathy and superficial materialism without it appearing listlessly list-like, and perhaps not everyone quite got the serial killer message. This year GQ Middle East ran a “get the look” feature on this very interior, with a slender proviso of “without the creepiness” and a full guide on where to get the Barcelona chairs and B+B Italia Alanda coffee table. (They should check in with MotherFatherSon next – the TV serial drama starring Richard Gere – where the media mogul’s son lives in chilly minimal splendour at the top of the Leadenhall building. Though surely even they know that no good comes to those who live with stainless steel floors.)

Recently I’ve been watching Fosse/Verdon, about the entwined lives of the choreographer-director and performer-choreographer in 1960s and 1970s New York. Their shared apartment, a penthouse in Manhattan at 91 Central Park West, with a terrace large enough for a vegetable garden and a dog run, was slavishly recreated by the designer Alex DiGerlando from old photographs. This was a world of Tiffany lamps and thick-pile upholstery, ashtrays on stands and dark greens and aubergines: like their lives, seductive more than healthy. The kitchen, a small room for such a huge property, had a chequer-board tiled floor. “I’d never have thought of putting crushed orange velvet on the walls,” he said in an interview.

No imagery existed of the Southampton beach house that Fosse took on in the summer of 1973 – a statement of change and an outward show of success, along with a much younger lover, following his spell in a psychiatric hospital. The team designed it from imagination – its concertina’d glazed facade suggesting a thoroughly contemporary footloose life that even New York couldn’t provide. Friends of Fosse have since said this fictional space is just as they remembered it, perhaps unsurprising as they were rarely one step from another sip of wine. And if you want to get this look, those Marcel Breuer Cesca chairs around the dining table are very much for real.

Mercedes-Benz India has just launched a facelifted version of the …
December 1, 2016

Renault India has launched the automatic variant of their bestselling …
November 11, 2016

Lenovo will finally launch its much-awaited flagship phone of the …
September 26, 2016

Many people believed that modern technology will first replace the …
August 9, 2017